In the Carriage House is the Civil War Ambulance, Circa. 1862. This restored ambulance was discovered by W. D. Lum. He spotted some unusual wheels and other gear for a wagon in a junk yard. He did not know what it might be but was sure it was old and most likely rare. He searched books, journals, pamphlets and catalogs for something that would enable him to make some identification.

In a book about vehicles used by the military through the years he spotted drawing of a Civil War ambulance built for the Union Army in 1862 by the Studebaker Corporation. Letters to the Studebaker people and to the Smithsonian Institution in Washington, D. C. followed. From both they learned that there was no such ambulance still in existence, but that the photos he sent of his find indicated that he had one. The Smithsonian confirmed the ambulance specifications he had found in the book and rates his find as authentic.

Drawings from the official records of the Civil War military records show the ambulance has special rockers to keep the patients as comfortable as possible while being drawn in the two-horse wagon to a hospital.

The Sanitary Commission Bulletin of the U.S. Army described the wagon: "To enable the badly wounded to be easily loaded and unloaded, two litters or beds are provided, made of wood like an ordinary shutter, with sliding handles at each corner. Upon this the patient is easily shifted without any disturbance. The litter is slid into the ambulance wagons on rollers. In the same way the patient is removed on arrival at the hospital and without being disturbed until he reaches his bed. If part or all of the patients are able to sit up, one or both of the litters can be slid into a compartment provided for that purpose under the floor of the vehicle. There are six permanent seats, each situated transversly, and each corner seat with back and cushioned seats. This gives a comfortable purchase, secures the patients against much of the usual holting, and prevents them from being driven against each other in going over rough roads."

From the Weekender, By Carl McIntire, Sunday Editor, date unknown.

Also are two horse drawn hearses purchased in New Orleans, and horse carriages. This Carriage House takes us back to a time of Sunday afternoon buggy rides, and the funerals in New Orleans. Memories of the past when people still took the time to visit. 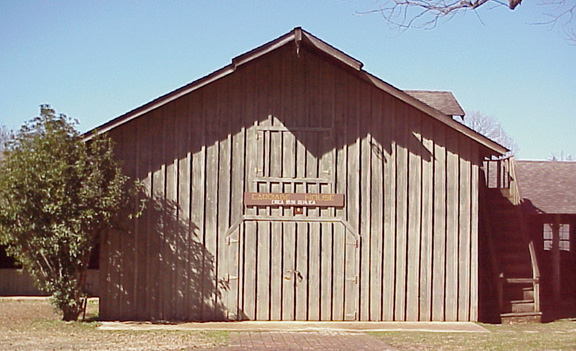