This church building was constructed in 1868 in the town of Rodney, MS. Rodney was once a booming river town just as Grand Gulf once was. In the late 1870's a school operated in the church also. By 1933, the population of Rodney had diminished to less than 100 and by 1957, only seven communicants remained at Sacred Heart. In February 1969, the Natchez-Jackson Diocese deeded the property to the Rodney Foundation for the most outstanding of the few remaining examples in Mississippi of carpenter gothic church architecture.

The building was donated to the State of Mississippi by the Rodney Foundation and moved to Grand Gulf Military Monument Commission in 1983. It has been restored to its original condition and is used as a non-denominational chapel by religious and other groups approved by the park. 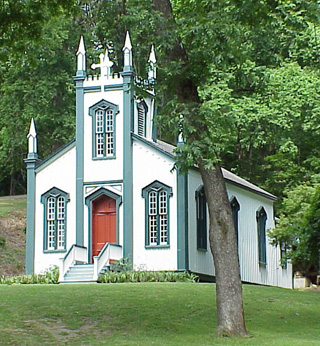