The house was built by Thomas Foster as a one room log house in 1768 in the community of Scotia, located 5 miles south of the present town of Roxie in Franklin County, Mississippi. The area was settled by a group of Scotch Highlanders in 1768 after Great Britain acquired the land from France following the French and Indian War.

The pioneers squared the logs with their broadaxes and carefully dovetailed the corners for a snug fit. The timbers above the front door are 52 feet in length out from heart pine and still in perfect condition. The thick walls made the houses cool in the summer and warm in the winter; and heart pine or cypress wouldn't rot, not did insects bother it.

Most frontier houses were only one story, however this one was two-story. The upstairs was added for families living quarters and the downstairs was used as a stage stop accommodation for travelers. Originally the kitchen had been a separate building, and an open hall in the middle of the house which was later enclosed to give the house six large rooms. The open hall was called a "dog trot".

At each end of the dwelling was a chimney; four fireplaces, two on each floor, heated the building.No nails were used to hold the structure together; construction of the logs were entirely with wooden pegs and dovetailing. attic and ceiling joists were exposed, and the upstairs floor extended through the logs to the outside. Split logs were even used on the floors.

Mr. and Mrs. J. A. Faulk purchased "Scotia" from the Robert Ferrells and moved it to Warren county, log by log. It was moved to Grand Gulf Military Park in 1974 and donated in memory of the Faulk, Foster and Johnston families of Claiborne County. Information for the above was gathered from park files, but a special thanks to Mrs. Hattie Howard of Port Gibson for sending us a copy of an article "Log House Predates Revolution" that appeared in the Vicksburg Sunday Post, Vicksburg, MS, on Sunday, May 26, 1974. 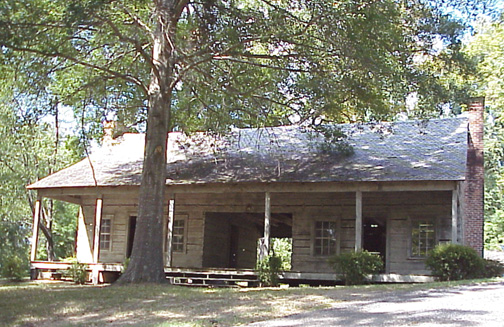 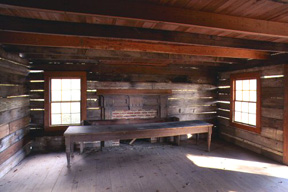