This house was built in the late 1790's of cypress, poplar, and heart pine and put together with wooden pegs instead of nails. The Spanish built structure represents one of several homesteads erected by five different groups of "Conquerors" who occupied and raised their flag over this area. The proximity of the house to Fort Wade caused considerable damage from Federal shells in 1863. It was repaired after the war and restored to its original condition in 1958 by replacing deteriorated timbers with new ones hewn from local forests.

It is a jewel of the past and will be preserved for the pleasure of the future. 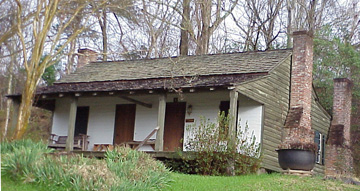