This water wheel was originally built for Mr. and Mrs. Peacock in 1948. Mr. Peacock acquired all the material from various places in this territory and also in Jackson and carried same to C.D. Mullins Welding Shop in Mendenhall for him to construct this for Mr. Peacock. Mr. Mullins did the work at a cost of $75.00. According to Mr. Mullins, Mr. Peacock had in mind exactly what he wanted and told Mr. Mullins and it was built to Mr. Peacock's specifications. the water wheel was encased in concrete blocks several feet off the ground for protection of small children. There was a Delco Generator which produced the electricity while the water ran over the wheel from this huge pipe from the lake. The electrical flow produced enough electricity to burn 9-50 watt bulbs. The bulbs were of course out in the open air and when a fog came or a rain the bulbs would burst. The purpose of this water wheel was to produce electricity. Mr. Peacock had intentions of producing electricity for the home place which was about a quarter of a mile from the lake site. This was an original and owned by no one else. 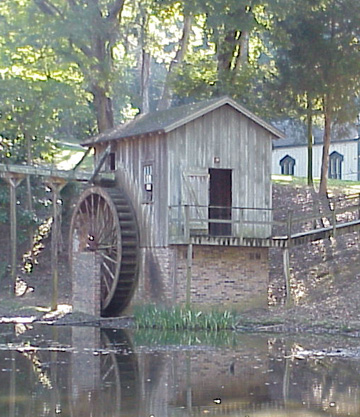